(1): There was a 5-5 vote tie between Chi and Brindle, the tribe revoted and Brindle received 6 votes, enough to eliminate him.

(2): Vindii played an idol negating 4 votes against her, 3 votes were left and all were directed towards Ryn, eliminating Ryn.

(3): There was a 4-4 vote between Imogene and Chi, in the revote Chi received 5 votes and Imogene received 1.

(4): Kitami and Dustin both played immunity idols, Kitami negated 1 vote and Dustin negated 2, but neither votes had an impact, as Mir received the majority of votes at 4.

(5): Imogene played an immunity negating 1 vote against her, this did effectively nothing as 3 votes were cast towards Triad instead.

(1): There was only one individual immunity necklace for one member of each tribe, Steph and Mir won the challenge.

(2): Dustin received no votes, Jinx received one, and Imogene received 8. 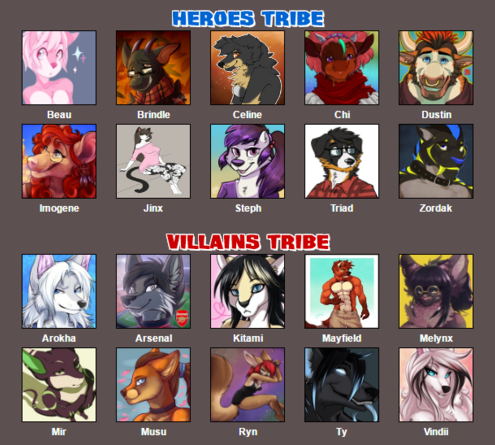 The cast of Survivor: Heroes vs. Villains
Add a photo to this gallery
Retrieved from "https://ojs-tables.fandom.com/wiki/Survivor:_Heroes_vs._Villains?oldid=158"
Community content is available under CC-BY-SA unless otherwise noted.